Yesterday, I off-handedly had an idea that could be a business model for news organizations: vetting advertisers. Under the assumption that an organization practicing journalism builds its credibility though truthfulness, transparency, and accuracy, there exists the possibility that they could then monetize that credibility by taking product claims through the ringer. Not selling out, per se, but rather by selling time and attention. Companies would pay you because they want to be associated with your authority; in order to get this authority, however, they’d have to surpass a set of open source criteria. We shouldn’t be taking the human touch out of advertising because then, every so often, you get something like this: 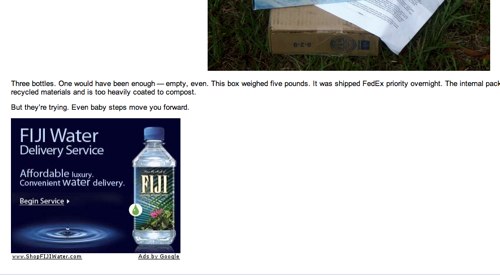 at the bottom of an article about bottled water and greenwash advertising. In my opinion, Lighter Footstep is now sending two contradictory messages: bottled water is killing our environment, and that I should pay a premium to have bottled water shipped from the South Pacific. This juxtaposition is broken because the misleading advertising has the opportunity to negate the value of the journalism.

Later: Dave Winer speculates on a “Digg for ads” which falls under this same idea of vetting advertisements (although crowdsourcing this time).

I like both ideas—yours and Dave’s—but I’m not sure they could be categorized together. Making sure advertisers are consumer-friendly is not the same as consumers voting on whether they like particular advertisements. That said, the increased visibility might encourage better practices.