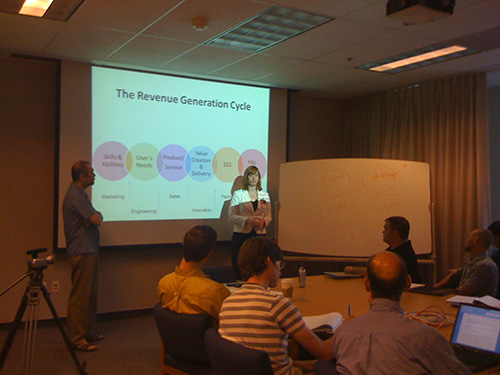 Arrived a few minutes late to Digital Journalism Camp, organized by Abraham Hyatt, and these are my notes from the first session about news entrepreneurship in Portland. Steve Woodward and Carolyn Duncan, of the Portland Ten, led the session.

Steve Woodward of Nozzl Media argues that the drop in newspaper revenue is a metrics problem. Newspapers need to work more with metrics and be able to prove their value such that they can reengage their advertisers. The tools for metrics in print are much less than the tools for metrics online.

Discussion about Perez Hilton. Carolyn Duncan asks “who the hell was this guy three years ago?” Chuckles from the audience as someone asks “who the hell is this guy now?” The same guy asking that question follows up with “if you want to be in this business, trust is the word. If you don’t have trust, you’re not going to make a dollar.”

Pete Forsyth on trust and citing sources on Wikipedia: “you want to have a clear, transparent editorial process.” The producer of the content has to adhere to a published set of standards that others can audit.

From Aaron Weiss, “TMZ adheres to a different set of ethics than CNN because it pays sources for information”. Reaction to that is that “it’s a mistake to think that all bloggers don’t follow a editorial process.” There’s a layer of news gathering right now that’s figuring itself out.

Nozzl Media is at the state of figuring out what the users want by asking them directly, instead of having conversations with other journalists about what the users might want (which is what is happening in this session). 100% of respondents didn’t want advertisements but did want to learn about deals offered by different businesses.

Kristin Wolff: “It’s an exchange. There’s an important element to this exchange and that is disclosure.” Transparency is the new objectivity. Bloggers offer this objectivity and are more open about who their advertisers are and how they are paid. The advertisements with the Sunday newspaper are just dumped into the recycling.

Steve Woodward argues that the local advertisers who don’t normally advertise in the newspaper (because it costs too much) are much more savvy about Google AdWords, etc.

Aaron Weiss asks why isn’t anyone at the bigger news websites in the Portland area trying to figure out the technology to sell more targeted ads? Carolyn Duncan argues that it’s because it’s not anyone on the business side’s core competency.

Ken Keiter says that it’s important to remember that large companies like KGW bring in outside companies to figure out the new advertising technologies. They don’t have the technical competency in-house to do the innovation that’s necessary to do more targeted advertising, invent new revenue streams, etc.

Question from the audience: what are the solutions you guys are thinking of? Some discussion about innovation at the Oregonian. Steve Woodward points out that this is one of the only rooms at The Oregonian with whiteboards in the newsroom. The Oregonian needs to invite more creative people into the building because “the business model has blown up like an IED.”