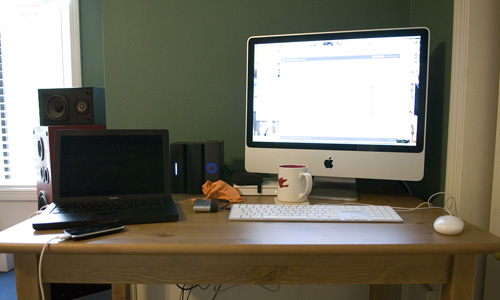 Not actually an unboxing because I ended up putting it together late last night. I’ve been long coveting a workstation that I can either stand or sit at. A couple of folks at Grist had them, and Drew Bernard at ONE/Northwest has one he hijacked from a drafting table such that it goes up and down. I was envious all last summer.

Yesterday, I finally convinced my mom to make an Ikea run with me. Originally, I was looking at either the Galant or Fredrik. The Galant is a table that can be raised as high as 35 inches. This isn’t enough to stand at, but conceivably you could stack something on top of it that would act as the workstation. Most attractively, it has a very wide surface area to work with. 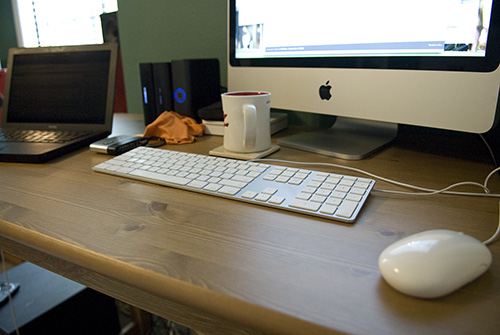 The Fredrik is designed specifically to be a computer workstation. It has multiple shelves that you can manually adjust the position of such that it can work as a standing desk or a sitting desk. The downside was that it seemed really utilitarian and “office furniture”-like to me. I wasn’t absolutely set on either.

In the 11th hour of the decision-making, Andrew Jesaitis suggested I look at IKEA’s bar tables. It was there I came across the Leksvik, and I’ve been rocking it all morning. It offers the same large surface space I wanted out of the Galant while also being tall enough that I can perfectly stand and work. There’s even a matching stool I can use when I need to sit. 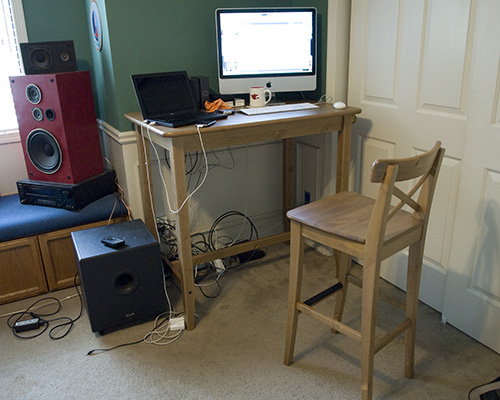 Nice setup! I’m definitely a fan of the standing setup – I feel like my posture is so much better that way and I’ll spend less unnecessary time doing unnecessary things. You should look into raised desk chairs too, or something a little more ergonomic than the bar stool. I’m all about ergonomics. With the amount of time I spend (and I’m sure you spend about the same) at the computer, I try my best not to do any major damage.
Nice speakers too – I’m sure your parents love those 😉

Day one has been an absolute dream. Thanks for the tip on the chair; I’ll have to look into those after the honeymoon is over 🙂