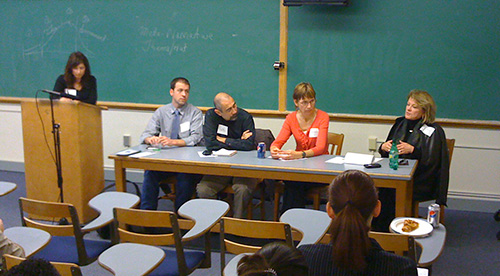 The lunch session at SPJ’s Building a Better Journalist conference today was YAPOTFON, or Yet Another Panel On The Future Of News. Conversation was facilitated by President-elect Hagit Limor (@hlimor).

DJ Wilson is the President and General Manager of the KGW Media Group in Portland. “More than ever, people are consuming media.” Part of it is the 24/7, anytime, anywhere demand from consumers. KGW is a content business that works to meet that demand.

Rita Hibbard (@rthibbard) is the executive director and editor of InvestigateWest, a reporting non-profit in Seattle started by ex-Seattle Post-Intelligencer staffers. The bad news is the sheer number of journalists that have been laid off; the number of credentialed reporters in Olympia, Washington has gone from 25 to 6. [Ed note 10/25: This may also be due to waning interest in covering government] “Readers and news consumers are starting to wake up to what’s being lost out there.” We’re not replacing the investigative troops, but figuring out new ways to get the job done. InvestigateWest is brand new; incorporated in May, website launched in July, and first story will be out next month. It’s a piece on the misuse of public lands. They generate original, high-level investigative content. The business model is to syndicate it to as many media partners as possible, not build up their website. The first grant InvestigateWest received was from the Bullitt Foundation, which hasn’t traditionally funded journalism.

“Collaboration is a big part of this new media ecosystem.” InvestigateWest is working with a number of media partners in ways that would not have happened five or ten years ago. “The era of one dominant media source in a community is over.” News will now be an ecosystem of many parts.

Steve Woodward (@nozzlsteve) is CEO and a co-founder of Nozzl Media. Nozzl Media is a startup that builds tools for news organizations to provide real-time, personalized streams of information to their audience.

“A lot of people in newspapers thought the internet was a fad and wouldn’t go away. When it persisted, they didn’t understand why it persisted because they didn’t use it.” It’s important, Steve argues, to learn from the past. Newspapers have moved online, but they aren’t learning new tricks. Display advertising online is forecasted to peak this year and then decline. Newspapers need to think seriously about video ads, search ads, and other formats for helping businesses get their message out.

85% of all potential advertisers in any given market are never contacted by ads salesmen. Most are just going after the same 15% over and over again.

“Be the competition,” Steve argues. Sales staff should act as an ad network now. Sell ads for your competitors too, to allow the client diversify the platforms, and take a cut of that.

Abraham Hyatt (@abrahamhyatt) is the founder of Digital Journalism Portland, an award-winning journalist, and currently working on a year-long research project looking at innovation on mainstream media websites.

Abraham hates the phrase “the death of newspapers.” It’s a crutch, he says, that polarizes thinking and limits the realm of possibilities. The really interesting examples of innovation are the super-local shops. The one or two person news organizations that are experimenting and have a willingness to fail. “It’s the little guys that are weaving together a tapestry of innovative ideas.” They’re the ones that are going to shape the future of news.

DJ says that technology is driving the core of what they do. On a business side, they’re balancing revenues with expenses and using technology to keep up. Abraham mentions that small groups are the ones that are nimble enough to try experiments and DJ says there are multiple groups within KGW doing this. She also believes that there will always be money in producing content; it’s a matter of figuring out how to deliver it on all of the platforms.

What are media sites doing well? Abraham has been pleasantly surprised by the number of organizations that are making money on mobile. They aren’t making money on their content, rather they’re building different consumer applications. DJ says that KGW is doing a lot to optimize their video delivery on their website. They’re also generating revenue by working with many businesses to offer coupons, and then taking a cut from any sales generated. Steve hasn’t seen much innovation from newspaper websites. “They have a lot to learn from tech companies.” The Palm Pilot was very successful in the 1990’s because they spent a tremendous amount of time measuring shirt pockets. This is called “form factor” and is really important. Newspaper companies don’t think about form factor. “No one under the age of 40 likes broadsheets, they like tabs… Why aren’t there special coffee shop versions of the paper that are more tailored to the experience?” Newspapers, Steve argues, need to invest in significantly refining user experience, both on the web and in print. They redesign at a drop of the hat but nothing ever changes significantly.

Why we link: #J361 presentation on curation
Covering Science and Technology: So you want to be a tech writer?

Clarification for the third graph. The number of reporters credentialed – at the State Capitol – in Olympia, Washington has gone from 25 to 6. I believe the comment wasn’t about layoffs, but rather about how the news media is losing interest in covering government.

Thanks for the clarification, Dennis. I’ve updated the passage accordingly.