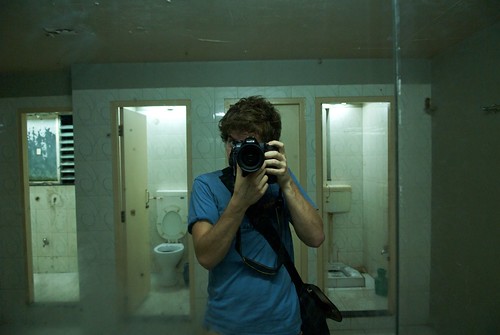 I left for India young, naive, and partially unprepared for the extraordinary series of events I was about to experience.  My bag wasn’t packed until late the night before I left, and it didn’t hit me that I was spending three months photographing in a completely foreign country until two weeks in to the journey.  By not thinking too much about it, and being entirely focused on what I was trying achieve, I think it was better this way.

Nike has the motto, “Just do it.”  Cliche, yes, but it is one which wholly encompasses every lesson I learned while traveling to capture a story on the cultural, social, and religious constraints to clean water access in India.  Always do what you’re most in fear of.  Feel uncomfortable shooting in the crowds of Magh Mela, the largest annual Hindu gathering on the banks of the Ganges? Just do it.  Uneasy about experiencing poverty in the worst slums of south East Asia?  Just do it.  Worried about the security situation in Kashmir, the disputed territory between India and Pakistan?  Just do it.  The first situation I wimped out on, a hundred thousand people in one stretch of river sounds like a lot of bodies, but it’s been at the back of my mind ever since.

Of course, any advice I make should be taken with a grain of salt.  Pushing boundaries just isn’t for some people.  For all the others, though, keep doing it.

Being a networking madman also has its advantages in putting together a story.  If you see an opportunity to shoot something you hadn’t thought of before, take it.  Don’t hesitate.  It’s difficult to do in an alien environment, especially when you would like everything to be normal, planned out, and calm, but certainly worth the effort.  Furthermore, tying journalism with development also will score you a number of connections, particularly in India.  The people behind the non-governmental organizations (NGOs) are generally more than happy to talk to you about the issues they are combating.  The government, not so much.

With all of that being said, there are a number of things I’ll be making happen next time.

For one, rethinking my adoption of technology.  Oddly enough, the trip journey was partially intended to give me a 90 day hiatus from being digitally connected at all hours of the day.   I made a decision to leave my MP3 player at home, which lasted until two weeks from the end when I broke down and bought a Chinese knockoff, as well as to take time off Twitter, a micro-blogging service.

Not only is it a cool way to report interesting things you come across hour by hour, but also a cheap way to keep in contact with friends and family.  The price of telecommunications is dropping quickly; to send an SMS cost Rs. 3.75 (around 10 cents) and receiving messages is free.  These astounding developments allowed me to even publish my experiences as I was in the middle of the Thar Desert, an arid expanse of land on the Pakistani border.

My goal was to go light and cheap.  Pack my backpack with only the things I really need, and then just take half of that.  Next time probably won’t be so light or cheap.  Even though I had to sell two pairs of skis and my kayak to afford this one, I would sell even more to bring a few more items:

An audio recorder.  India is rich with sound.  For the same reasons I brought earplugs, I need a device to archive the myriad of noise happening at all hours of the day.  Every train station has a unique announcement tone unforgetable to any traveler who has spent a lengthy period of time in one, whether waiting for an afternoon city commuter or spending the night curled up on a freezing platform.  Bus rides also offer the cacaphony, let it be a screech of tires as the vehicle races along a narrow, cliffside road or the horn which a driver can commonly lean upon for minutes at a time.  It never ends.  For this story, however, the sound of water is the most valuable component I missed.  Each region has its own footprint, the tap empties in the pot to a different rhythm, the bucket clangs against the dug well to its special beat, and the conversations surrounding these activities are in their own local language.  Sure, photography is rich as a visual medium, but audio definitely helps to complete the circle.

I could also have taken better interviews with a recorder by taping them instead of frantically trying to take notes.

A GPS.  Also known as a global positioning system, such a device has the ability to track where you’ve been and when you were there.  Of course, I can always do this manually by dropping images on the map, as I do with many of my Flickr photos, but automating the process would be a huge timesaver, as well as lowering the barrier to entry.  Geo is the next big thing, and geo-aware news even more so.  Tagging my images geographically would not only provide an interesting way to keep track of them, but also allow any story I create to be geographically interactive.

More memory.  Duh.  Sixteen gigabytes is enough to shoot for just few days tops.  Stretch that over a month, and the photographer is struck with an inability to make images.  I’d like to call it photographer’s block.  When you have to edit on the fly, or at least while driving between locations, it makes you think twice about whether you’d like to shoot 20 or 60 frames on a particular scene.  Furthermore, processing as you go doesn’t give much perspective on the set.  Often when I’m in the States, I’ll go back to my images at a later point only to find I like best a photo I was close to deleting earlier.  Considering I only kept a tenth of what I shot between February and March, I can only hope I didn’t kill too many Pulitzer winners.  This problem of a memory shortage can easily be remedied in these ways: bringing more cards, bringing a laptop, or a combination of both.  Unfortunately, these two solutions require funding.  Students are often short of funding.  My solution: sell more of the junk you don’t really need.  Some call it minimalism; I like to call it keeping to my roots.

Quite possibly the strongest, most poignant lesson I learned was that, to last three months in a country, I need a constructive project to do.  Building upon that, it is also wise to approach a country with multiple story ideas in hand.  With the way my planning worked out, I was done shooting what I had outlined for the water story by the second week of April, leaving me with nearly three weeks free.  I can’t stand the “tourist thing” for more than a few days.  As a result, I came up with a cockeyed notion to photograph people under occupation in Kashmir and Ladakh, with the intent of comparing and contrasting the two regions.  In Kashmir, there are reportedly 1.2 lakh (million) security forces for between 10 and 12 million people.  On nearly every street corner, there are bunkers with intimidating soldiers, intimidating machine guns, and intimidating barbed wire.  Needless to say, it has an effect on the local population.

Research beforehand might’ve helped me refine the second story enough to realise Ladakh is still covered in snowed at the time I wanted to hitchhike there by truck. For all of the regions I missed though because of access, Ladakh, the Kinnaur Valley, Pakistan, Tibet, and Bhutan, there’s always next year, right?

Adhoc transportation
Ideas for a UO Sustainability Conference in October?

Hey Daniel, great post. Where you said “to last three months in a country, I need a constructive project to do.” I couldn’t agree with you more. I lived in Havana, Cuba last fall and it was wonderful, it is a fascinating and beautiful place. I had a really, very difficult time though feeling like I didn’t have any productive project to be working on. It felt too much like vacation, which was a little hard to handle for that long. That’s cool you already looking to go back too, that’s a really nice feeling.
cheers
Isaac

Stories of your travels take me away during my lunch break… but I must return.

Homemade gnocchi with sausage, and butternut squash and apple soup