Drew Geraets led a session this morning on American Public Media’s Public Insight Network, an initiative and tool to bring their audience deeper into the reporting process. Funded by the Knight Foundation, they’re currently doing a complete rebuild of their CRM for journalism to produce a fully open source project and expand usage beyond the 12 existing media partners. 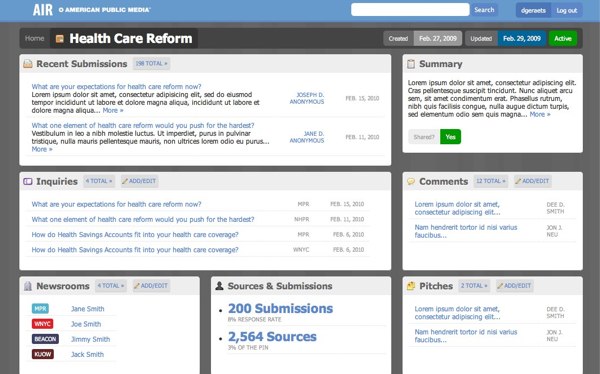 The prototype dashboard for the reporter-facing Audience Insight Repository is project-based and focused on collaboration. 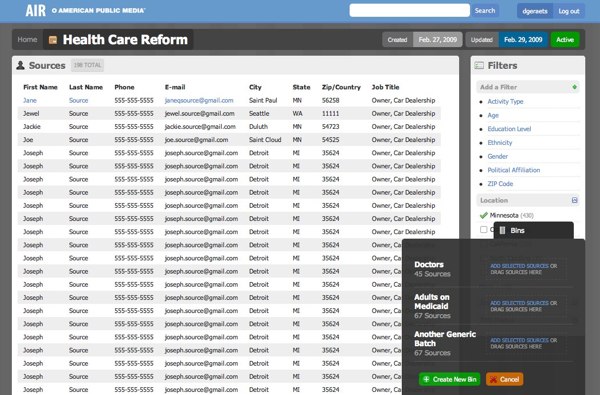 Journalists can search through a huge database of sources based on demographic metadata. 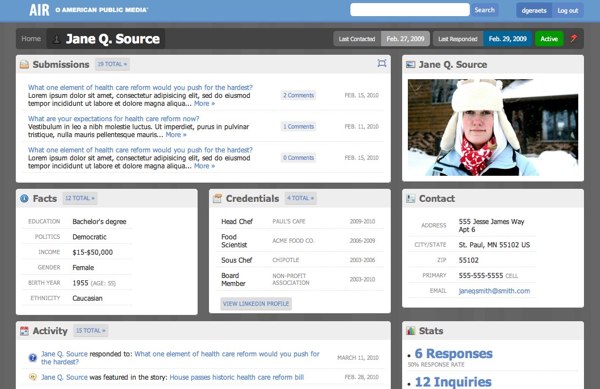 Once they’ve found a worthwhile lead, the journalist can click through and get contact information, background on the source, and a record of prior interactions. 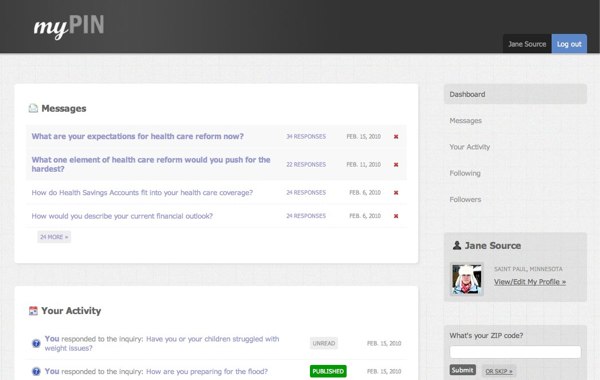 The project also has plans for a user-facing site tentatively called MyPIN where they’d be able to engage more fully with the news organization’s reporting process or update their profile information.

There’s a certain amount of friction, however, in requiring sources to manually update their profiles every time a bit of their personal data changes. As the system exists now, American Public Media requires readers to submit full contact information every time they fill out a form. If the contact information on the form is different than what is in the database, then that discrepancy is flagged and an analyst has to manually address that conflict. In the future, in addition to enabling users to update their profiles on their own, it might also be worthwhile to explore integrating with LinkedIn, Facebook or Twitter. With LinkedIn or Facebook, the user could update their resume, contact information, etc. and have it automatically pulled into the Public Insight Network. By integrating Twitter, for example, journalists could easily find sources for a given story by having search localized to updates from users within the network.

We also discussed user privacy, which getting correct is of significant interest to American Public Media. More importantly, what control users have over their privacy and how to make policy changes without surprising or alienating them. An idea I suggested is that, rather than presenting just a list of options for the user to choose from, they should instead try a Hunch-style approach. With this, they’d be presented a series of questions detailing scenarios about their data and how it might be used. The decisions the user made responding to each scenario could then guide their privacy options. At some point, American Public Media would like to start sharing source information amongst all of their media partners using the software, but it will be critical for them to execute that move right the first time.

View from the top

Mobilizing Mobile Records makes It to round two

the notorious b.i.g. vs. the xx