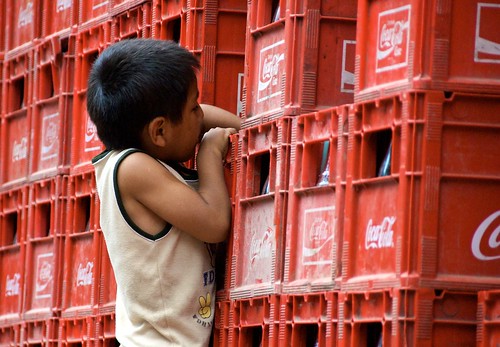 ColaLife is a “campaign to try and leverage the distribution muscle of a multi-national corporate institution to get life saving medicines to children in developing countries.” In short, to convince the Coca-Cola Corporation that it is worthwhile to distribute rehydration salts through their robust and well-developed delivery network, apparently a weakness of most non-governmental organizations. Those spearheading the ColaLife campaign, to my understanding, have focused their advocacy efforts largely online, using a Flickr Group, a Facebook Group, and a Twitter account to raise awareness, organize people, and spread the word. Coverage in traditional media is also a goal, obviously, but it’s interesting for me to watch, among with other reasons, because I think this “social internet” now has the critical mass necessary to be used as catalyst for a singular goal. ColaLife, in my opinion, could be a ground breaking test case.

As a plus, I’ve finally found a good cause for a random series of images I took while in Peru last summer. Sweet, huh?

Baby on board
Introducing CoPress